More than $100 billion worth of new roads, rail lines, hospitals, skyscrapers, prisons, wind farms and other infrastructure is being built or planned in Victoria as the state’s surge in the delivery of major projects gathers pace.

A spike in investment by governments and businesses in new projects in Victoria has pushed the value of what is being built or planned to a new high-water mark of $106.2 billion.

Victoria’s infrastructure boom outpaced all other states in the three months to June as the list of projects in development or under consideration grew by $18.5 billion.

The Victorian Government is investing $57 billion in major infrastructure and smart technology projects underway to build more capacity on existing networks and fund improvements across the road, rail, and port.

Modern and reliable transport will be key to maintaining our prosperity and world-famous liveability as our population continues to grow rapidly and the economy changes. 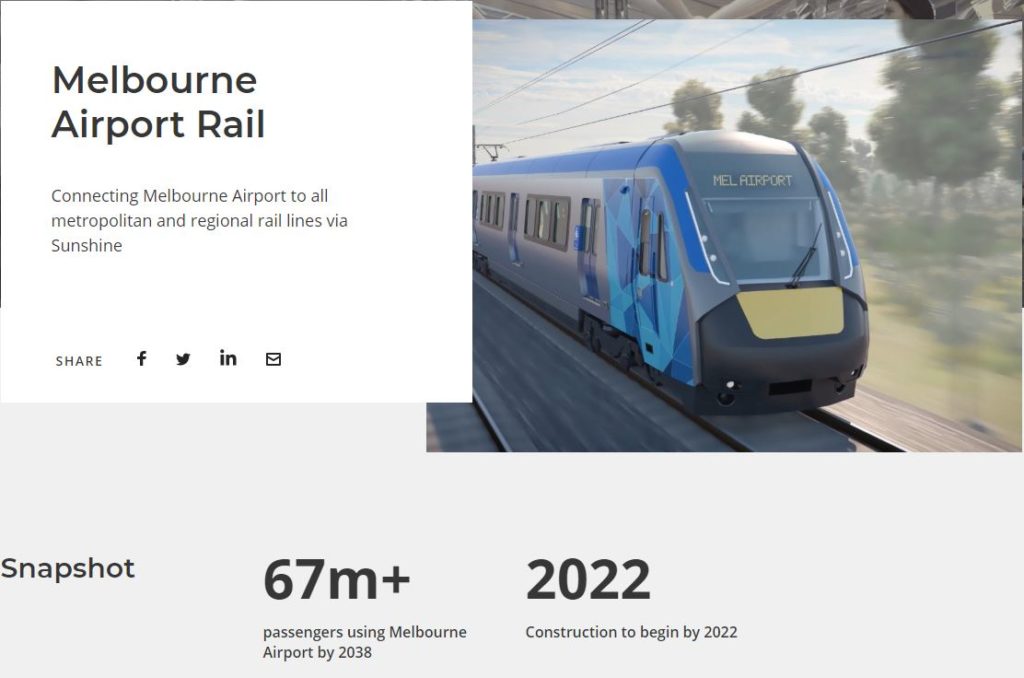 Among the new projects is the long-proposed rail line to Melbourne Airport, which has received a $5 billion commitment from both governments, and the $15.8 billion North East Link Victorians are set to benefit from the long-awaited Melbourne Airport Rail Link - with the Victorian and Federal governments formally signing off on the project on 14 March 2019.

The missing link will connect communities and give Victorians choice – delivering a new super-hub at Sunshine, reducing congestion on the freeway to the airport and unlocking capacity for the growing population in Melbourne’s north-west.

The business case will be delivered by 2020 and will assess station and procurement options, value capture and creation opportunities and economic analysis.

A reference group will also be established to consult with the community, industry, and local government representatives.

The Victorian and Federal governments have committed up to $5 billion each to deliver the missing link. The total project cost is estimated to be in the range of $8 billion to $13 billion.

Construction will take up to nine years and is due to commence in 2022. The toll road, to which the Turnbull government has committed $1.75 billion.

Eight kilometers of single track from Dandenong to Cranbourne would be duplicated as part of the project.

This would remove the bottlenecks that cause delays and allow the number of train services to be doubled during peak times, delivering trains every ten minutes along the whole Cranbourne line.

This would help move trains more quickly through these stations, cutting delays and getting people home sooner.

The project would create more than 1,000 jobs. Detailed planning and procurement would start next year, with construction to start in 2021 and finish by 2023. 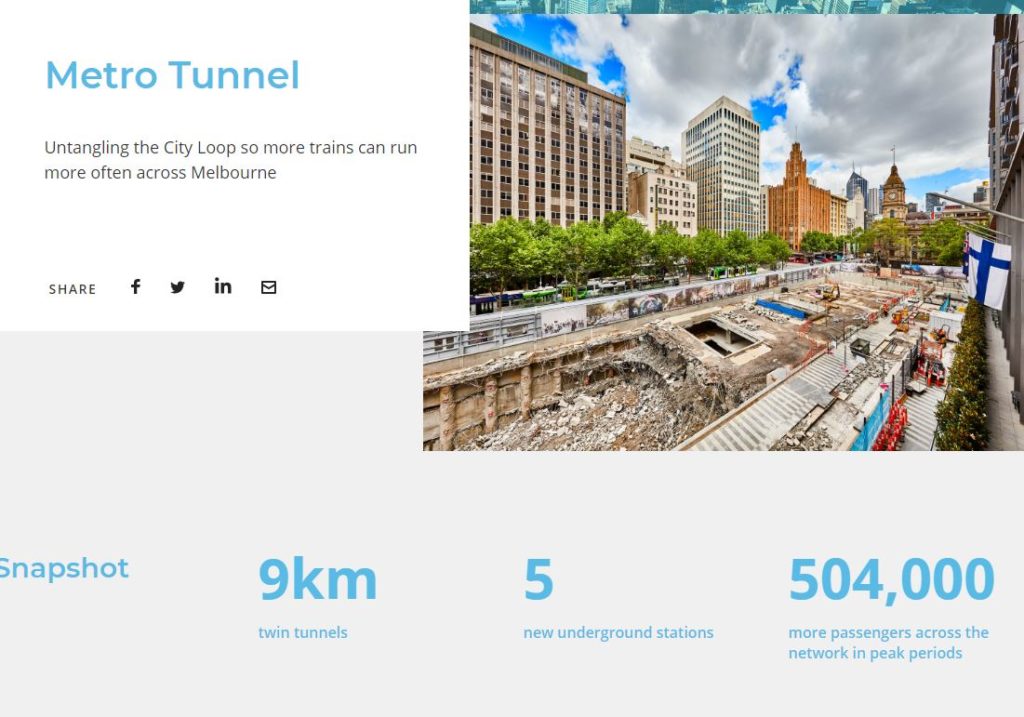 Untangling the City Loop so more trains can run more often across Melbourne.

The Metro Tunnel is Melbourne’s biggest rail project since the City Loop was built in the 1970s. It involves building twin rail tunnels and five underground stations from North Melbourne through to the Domain precinct, south of the CBD.

The Metro Tunnel will also provide access to the University of Melbourne and health facilities such as the Royal Melbourne Hospital, the Royal Women’s Hospital, and the Victorian Comprehensive Cancer Centre.

The project’s benefits will be far-reaching – by taking three of the busiest train lines (Cranbourne/Pakenham and Sunbury lines) through a new tunnel under the city, it will free up space in the City Loop to run more trains in and out of the suburbs.

New, modern technology will allow trains to run every two to three minutes, beginning the transformation into a ‘turn up and go’ rail system for Melbourne. 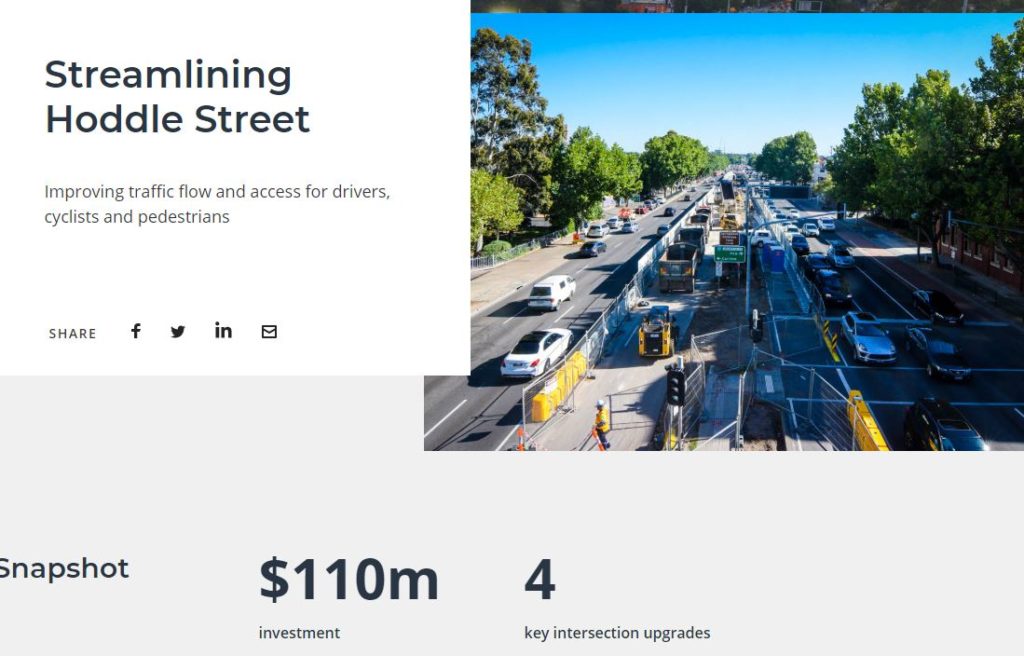 Improving traffic flow and access for drivers, cyclists, and pedestrians.

The Streamlining Hoddle Street project will improve the travel experience for the 330,000 people who travel along and across this busy road each day.

New pedestrian paths and crossings will be built, as well as dedicated cycle lanes at Swan Street to improve access and safety for cyclists and pedestrians. There will also be dedicated bus and tram lanes and bus priority at traffic lights.

Work started on the Streamlining Hoddle Street project in early 2018, with construction expected to be completed by the end of 2019.

It will include new stations and connect major railway lines from the Frankston line to the Werribee line via Melbourne Airport. 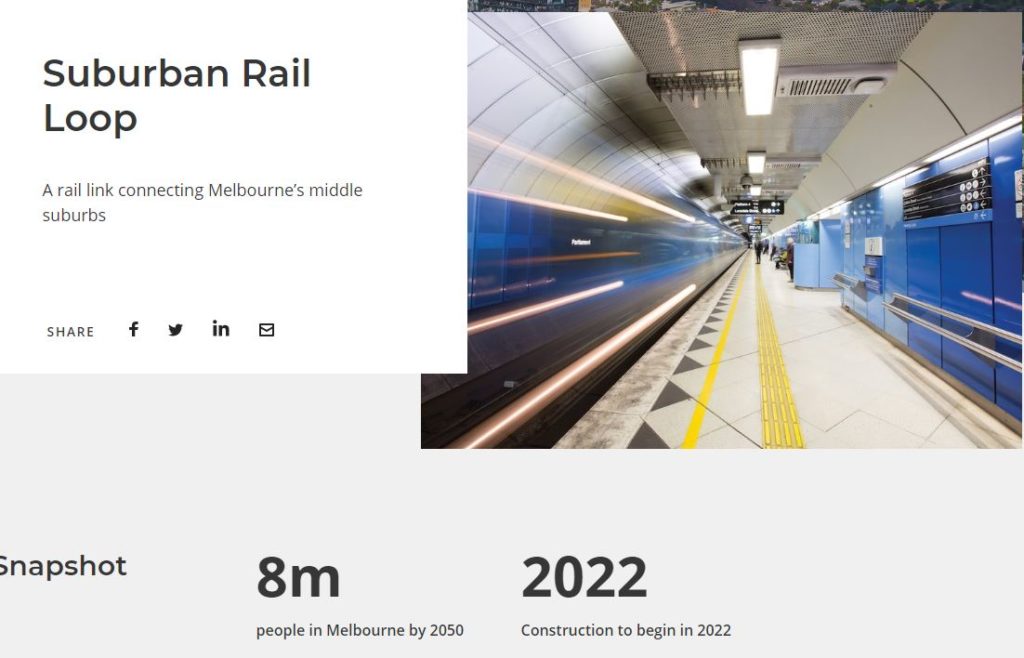 The Suburban Roads Upgrade is a $4 billion investment that will improve 20 priority roads across Melbourne’s outer west, north, and south-eastern suburbs.

Work is underway on the $1.8 billion projects that will transform eight priority roads in Melbourne’s western suburbs.

Funding will also be put towards improvements and maintenance for more than 260 kilometers of road between Footscray and Werribee for the next 20 years.

Planning is underway for the south-east, that will add extra lanes to:

Road safety and surface improvements will be made along Golf Links and Grant Roads, and the roundabout upgraded at Golf Links, Grant, Warrandyte and Baxter-Tooradin Roads in Langwarrin South.

The Victorian Government will invest $100 million to revitalise Flinders Street Station and make the station more functional for passengers.

Without urgent heritage works, parts of the station will become unsafe, unusable, and eventually unsalvageable.

Works will also help commuters and tourists who use the station every day. Platforms and entrances will be upgraded to ease passenger congestion at peak times and allow people to move through the station faster.

Toilets will be fixed, dingy and under-utilized areas will be cleaned up and well lit, and new information displays will be installed.

The project commenced in 2015 and is estimated to take four years to complete. It will create jobs, boost the surrounding commercial precinct, and help keep Melbourne a tourist destination.

Besides, a business case is being developed that will allow the Victorian Government to consider options to fix the old ballroom and other derelict parts of the building, with a view to bringing in new tenants and creating an exciting commercial precinct.

The heritage works to be undertaken include:

Works to improve the station for passengers include:

Melbourne’s arts precinct at Southbank has one of the highest concentrations of arts, cultural and creative organizations anywhere in the world – and presents up to 3000 performances and exhibitions each year.

The Melbourne Arts Precinct Transformation will introduce major new attractions such as NGV Contemporary – set to be Australia’s largest gallery dedicated to contemporary art and design – as well as a new Australian Performing Arts Gallery and an expanded Australian Music Vault.

It will modernize Arts Centre Melbourne’s Theatres Building – under our city’s landmark spire – in its first major upgrade in 37 years, and create a new creative hub with spaces and facilities for Victoria’s small to medium and independent arts sector.

Complementing the precinct’s existing facilities will be 18,000 square meters of new and renewed open public space that will connect the iconic St Kilda Road cultural institutions to a world of new experiences behind them.

Melbourne Arts Precinct will be a place you can visit day or night to have a great time, soak up the atmosphere and have a distinctly Melbourne cultural experience – whether you have a ticket to a show or not.

Work is already underway on the first $208 million stages of this city-shaping project, including the purchase and allocation of key sites for development. Plans and designs are expected to be completed by 2020.

Melbourne Park will remain the home of the Australian Open until 2036, thanks to a $972 million transformation of this world-class sporting precinct.

The redevelopment of Melbourne Park aims to cater for the growing popularity of the Australian Open and to establish Melbourne and Olympic Parks as an unbeatable sports and events precinct.

The redevelopment places a strong emphasis on the comfort of patrons, with more open space and shade, increased seating capacity, better connections to public transport and the city, and easier movement into and within the precinct.

Aside from the Australian Open, Melbourne and Olympic Park are one of the biggest sports and entertainment precincts in the world, hosting around 600 events and attracting more than two million people every year.

Development Victoria is working with Sport and Recreation Victoria, Melbourne and Olympic Parks and Tennis Australia to manage the redevelopment.